We specialize in design, research, development and integration of intelligent robotic systems. GIM Robotics delivers software that makes our clients’ mobile working machines in all industries more intelligent, precise and efficient. With our help, their vehicles can start driving autonomously. That being the case, it is no wonder, that most of our coolest projects are secured with ironclad non-disclosure agreements (NDAs) and we just can’t reveal them.

Maybe we dare to mention, that our algorithms have been used for example for localizing locomotives while providing them situational awareness, providing GNSS-free localization, situational awareness, and berthing operations for ocean-going vessels, raising autonomy levels of agriculture and forestry machines by localizing them in GNSS-challenged environments and providing full-stack solutions for various road-based vehicles. We hope that the above text is vague enough and will not ruffle any feathers.

Luckily, we also have a great portfolio of public projects, which we are more than happy to share. Like the revolutionary Trombia Free shown above.

Tram drivers work long hours in all-weather conditions – also when the nights get dark. Therefore collisions with cars, people and abandoned objects like electric scooters are not rare. Our common goal is to reduce the amount and severity of these collisions, by assisting the driver, or by automatically braking. These are functions of Škoda Group’s Anti-Collision System that is being developed jointly in the Czech Republic and Finland.

Just after releasing the other day the cool video from LMAD project (shown below), where GIM Robotics built a beautiful autonomous last-mile delivery robot piloted at Aalto University Campus, Otaniemi, Finland, we were yesterday part of the launch of the great Trombia Free autonomous street sweeper. Well, they might call it a street sweeper. We call it an awesome autonomous service robot. Check out this Hollywood quality video. Once you have enjoyed that appetizer, you should move into the main course and hear the full story. It includes also the prize winning performance of our own Tapio Taipalus (14:15 onwards). Our CEO tells you what GIM Robotics did in this great project and how we did it. If you still have some room for the dessert, read what the prestige ROBOTREPORT tells about this game changing launch. Trombia Free will definitely rock the world!

Last month, the LMAD startup successfully operated its last mile autonomous delivery platform at the Aalto University Campus, near Helsinki, Finland. The local K-Market grocery store offered its customers the option of ordering their groceries online and having them delivered by LMAD’s autonomous delivery robot. That main hero of the above video (in addition to the brave shop owner of the Otaniemi K-Market Aleksi Tapani of course) is that great looking autonomous mobile robot, which, you guessed it right, was built by GIM Robotics. After you have watched the movie, while enjoying your popcorn and beverages, please read Gergely’s (from LMAD) blog post and EIT Digital’s news article to get the full picture. The last-mile delivery  is one of those really hot topics in service robotics business. This LMAD led EIT Digital supported project together with Futurice, Forum Virium Helsinki, Bestmile, ClickandEasy, TwinswHeel and Cap Digital has been a real success story so far and we at GIM Robotics can hardly wait for the next phase.

A concept demonstration of fully electric and autonomous lawn mowing in a full scale park together with Helsinki City Construction Services, STARA.  This demonstration was part of the longer development which aims for unmanned park maintenance.

The aim of the Social & Autonomous Robotic Health Assistant project was to develop a SARA robot that would ease the workload of care facility staff and provide clients with opportunities for social interaction.

The robot was developed collaboratively by four project partners: GIM Robotics and Forum Virium Helsinki from Finland, Bright Cape Holding from the Netherlands and Technische Universität Berlin from Germany.

GIM Robotics was responsible for designing and implementing the autonomous mobile robot platform and providing localization, mapping and navigation capabilities for SARA. The project was funded primarily by EIT Digital and participating companies.

In 2016 our elegant autonomous mobile robots acted as mobile stands for these well-known innovative furniture designs and while doing that, became elementary part of the great show as well. How cool is that? The location was Helsinki Design museum and the famous designer was the one and only Mr. Eero Aarnio.

There has been a worldwide demand alredy for decades to develop a robot for visually impaired people as an alternative for the guide dog. However, the development of such a device has become technologically and economically feasible only during the last decade mainly due to the maturation of relevant sensor technologies and algorithmics.

RoboGuide project is funded through EU EuroStars program. Our partner is a German company Locomotec. Their application is a running companion for the visually impaired. The project started in Nov 2018 and will continue until April 2021. The target is to develop and test a prototype that would be ready for further development and become a commercial product within a year or two. The project is run by one of company’s founders, COB Professor Emeritus Aarne Halme.

The first year was used to interview potential visually impaired users and to produce the first mock-up test equipment to evaluate the mechanical structure, its ergonomical aspects and to study the functionality of the sensors attached. The first version of RoboGuide is shown in the picture, where Mr. Teuvo Heikkonen is testing it.

The robot has two driving wheels and in the middle of their axis a vertical bar with a joint. At the top of the bar there is the user handle with access switches. The user follows the equipment by holding the handle. The user is able to adjust the speed and the pulling force. The most important sensors are a laser-radar, camera and inertial unit. The robot has also a satellite navigation unit.

Current mechanical construction is an engineering version but soon the robot will get a designed cover for the protection of the electronics and a smart outlook. The software stack is under continuous development and additional functionalities are added and tested all the time. To get more information about the technical details, please visit the project’s Blog at ROBOGUIDE.ORG 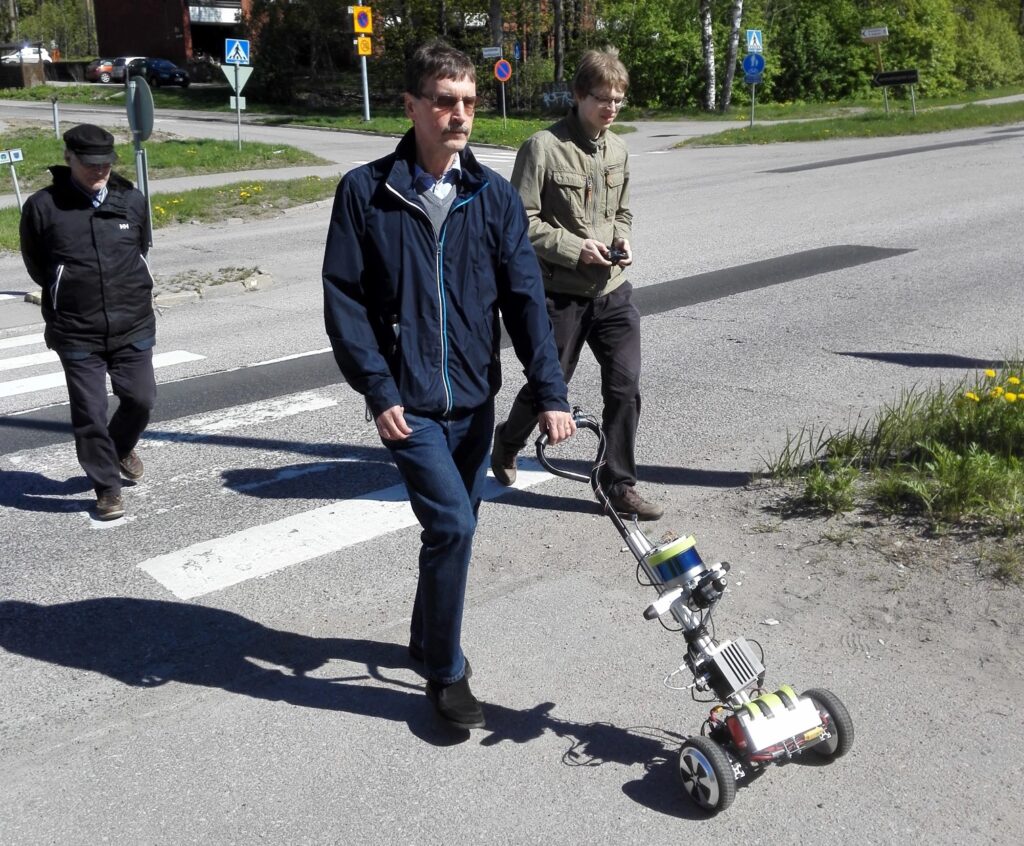 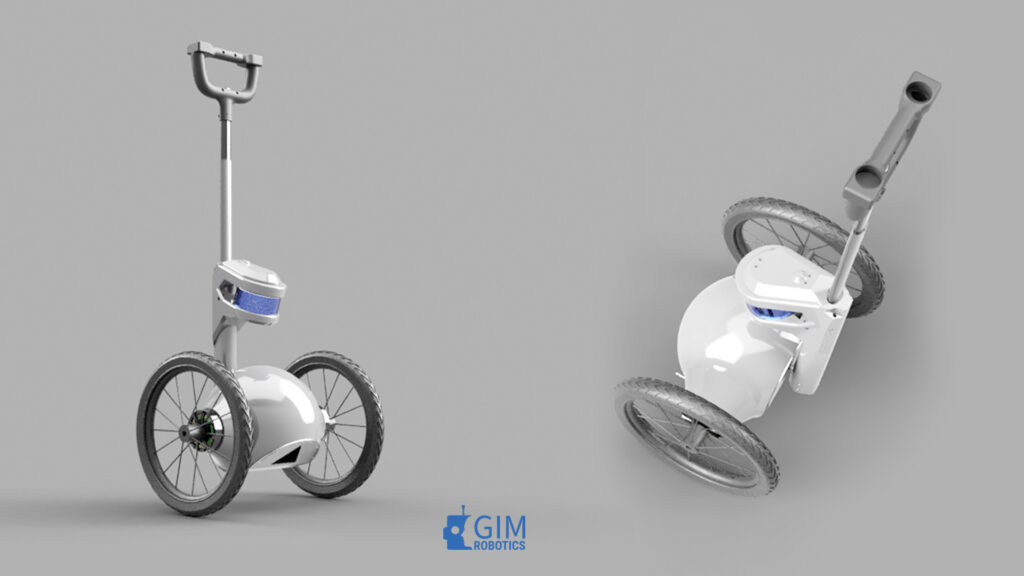